EAV testing utilises a physical phenomena in the body called Meridian Lines. The use of the term Meridian Lines, stems from the ancient Eastern art of acupuncture. The term refers to energy channels that run through different parts of the body. These channels relate to specific organs or systems in the body, such as the endocrine system. In the twentieth century the German Doctor, Reinhard Voll, discovered various points on the body where measurements could be taken to establish the condition and health of the various organs and functions of the body. This evolved to be called ElectroAcupuncture According to Voll…hence the abbreviation EAV. The points used for testing became known as EAV acupoints.

Unlike acupuncture, an EAV testing session does not use any needles or similar techniques. Instead the client holds an electrode in one hand and the practitioner uses a probe, connected to same machine to establish readings for the various areas of the body. A microcurrent passes through the electrode and from the software image on a computer screen both the client and the practitioner can see exactly what’s going on.

Today’s modern EAV software also includes libraries, where the energy signatures of many different items are stored. Clients can be tested for food allergies, toxins, viruses, bacteria, pathology and many more categories. The software shows the practitioner whether the area being looked at is normal, in a state of inflammation, weakened or in a condition of cellular deterioration.

Additionally, most modern software includes libraries of remedies. This includes vitamins, minerals, herbal supplements, amino acids, enzymes and homeopathic remedies. These can be tested against a point that has problems to see if they bring it back into balance i.e. in the normal range. 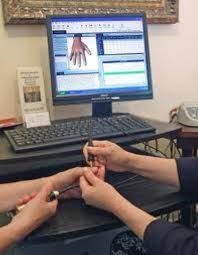 One of the nice things about EAV testing is that the client is involved in the process throughout the session and testing. They can see the reads the practitioner is getting on the screen, they can see which particular area of the body is being tested and so the consultation is much more inclusive. The evolution of this type of testing, particularly with the wealth of libraries now available, gives the practitioner so many options to get to the bottom of things. Using the remedies or supplements indicated can bring about a reversal of ill health and shed light on many client conditions that had previously been chronic.

In the London area there are several clinics who offer this type of screening. Simply type in the words EAV testing London in a Google search bar and you will see plenty of options come up.